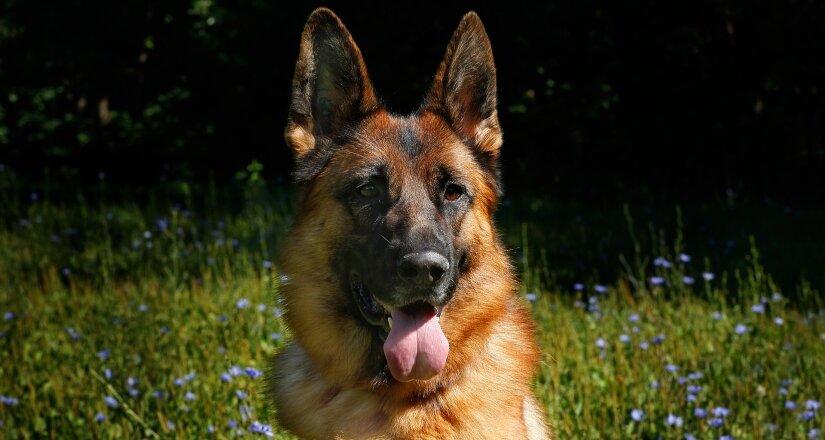 Why Doesn’t Your Dog Respond to Come Here?

German Shepherds are really smart folks. They are well known for their superior intelligence. Even so, there are many cases in which the dog completely ignores the person calling him. The “come” command is a difficult command because it requires your dog to shift his focus to you, and then comply with your command.

In essence, it is a command that competes for the German shepherd’s attention and whenever there are serious distractions it will probably not work. In addition, every time you say the command and he doesn’t comply and there are no repercussions you’re reinforcing that his coming to you is optional.

First, let’s take a look at why your dog may completely ignore you, and then we’ll take a look at a cool way to teach him to come to you consistently regardless of the situation.

Why won’t your German shepherd respond to “come”?

There are several reasons for this, the most common of which is not enough training. People often get impatient and go from a completely distraction-free environment to the outside world and then they wonder why he won’t respond.

You need to understand that, for a dog, it is a big deal to ignore what his nose and eyes are telling him and listen specifically to you. After all, who are you anyway? So after he gets the idea of the command, start with mild distractions and then work your way up.

On the same chain of thought, don’t try to convince him to come to you when he’s distracted if you know he’s not prepared to do it. Training your German shepherd takes time and patience, but the breed is very smart, so don’t give up.

Finally, the biggest mistake dog owners make is forgetting to praise the dog when he does come to you. Lack of reward means there is no reason for your dog to come to you. Either use a treat (not recommended) or lots and lots of praise.

A nice way to teach your dog to “come” 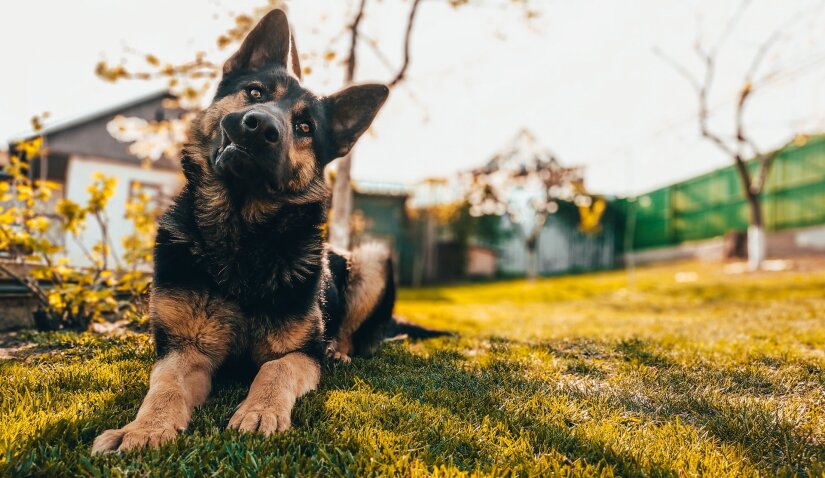 The best way to teach him is to disguise it as a game. You’re never going to actually train him, you’re going to teach him to love coming to you. Grab a couple of friends, give them a handful of treats and have them sit in different rooms.

Now you are going to play the “where are you?” game. Start calling him to you in turns and give him a treat every time he finds the correct one of you. Pretty soon he’ll catch on that whenever he comes to the right person he is going get a treat and lots of praise.

This is a great game to play with your kids, and it’s an excellent method to train your dog to consistently listen to you regardless of distractions. The whole point of training is to reinforce positive behavior, not punish negative behavior.

Teach Your Dog to Stop Pulling the Leash

A lot of people think that when you’re walking your German Shepherd dog you should let him sniff around and run with him wherever he wants to go. Somehow people feel pity towards their dogs and feel the need to empathize with what they think the dog wants.

The truth is there are lots of things that attract your German Shepherd’s attention, from people walking on the street to new smells and animals. He will try to go where he thinks he wants to go. And usually, that means he is going to pull you with him.

Whenever he pulls the leash and you allow him to do it, you’re reinforcing this behavior because he gets what he wants. Once he’s done this once and it worked he will obviously do it again. Besides, the German Shepherd is quite a strong dog and most people have difficulty managing him. Here’s what you can do to stop your German shepherd from pulling on the leash.

The “I’m not going anywhere until you stop” approach

You’re having your lovely morning walk and suddenly Amos starts pulling you everywhere. Whenever he starts doing that just stop dead in your tracks. Don’t move until he stops. He will probably keep going for a while, but eventually, he will stop.

So, it’s just a matter of time before he realizes pulling isn’t getting him anywhere. When he does stop pulling, praise him for good behavior and then start walking again. Shortly after, he will try to pull again, and at that point, you repeat the procedure.

Anytime he pulls, stop in your tracks, and wait for him to stop. You find it doesn’t take a long time for him to figure out that as long as he’s pulling on the leash you’re not going anywhere. 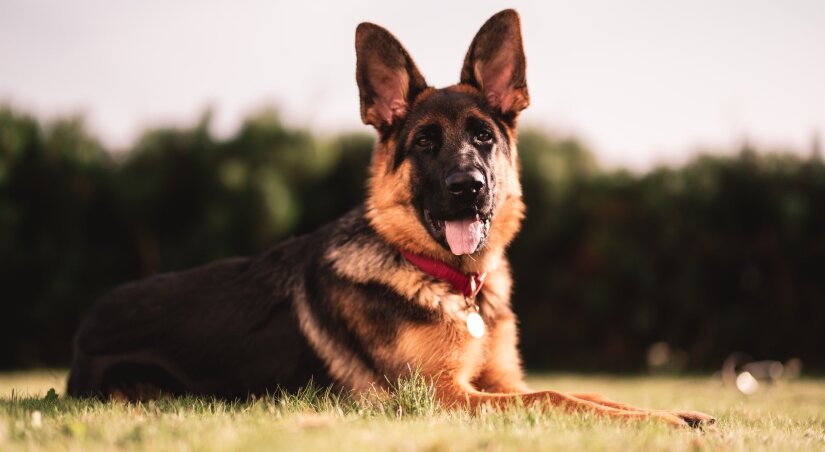 This is a simple technique but requires a little bit of timing to pull off. Whenever your German Shepherd starts to pull on the leash; turn around and start walking in the opposite direction. Amos is forced to come along, and he must likely hurry up to keep up.

When he does turn around and begins to follow you start praising him. This is all there is to it, simply turn around whenever he starts pulling and he will soon catch on that he has to follow you. If you’re just beginning training; you can also give him a treat, but don’t keep that up for long.

Again, you must understand that if your German Shepherd is pulling on the leash and you’re letting him get away with it he’s asserting control and you’re not in charge anymore. It’s important to keep him under control to ensure a good relationship between you and your dog.

How to Stop Your Dog From Food Guarding

You’re in the kitchen, your German Shepherd is eating peacefully, one of your friends approaches him, and all of a sudden he starts mumbling and growling as if someone is going to take his food away. Your friend is not the only one who is startled.

Of course, this behavior is unacceptable in a family pet, unfortunately. But you can do something about it. The primary reason dogs guard their food is they fear it might be taken away. You are going to make them think otherwise.

Reinforce that people are givers, not takers

German Shepherd Food GuardingThis works best if you start early on. Every once in a while go to his bowl while he’s eating and drop a tasty treat. You want to reinforce that approaching person mean something good, not that his food will be taken away.

Also have your friends do this, if he just sees you every time he is going to associate you with something good, but German shepherds will still be suspicious of strangers.

This is one of the biggest reasons house dogs still guard their food. Once you have dealt with this you’ll find he’s much more hospitable even when he’s eating. But doing this thing poses a different problem. If you’re not supposed to take his food away, then when can you take his food bowl?

Establish and reinforce the 15-minute rule 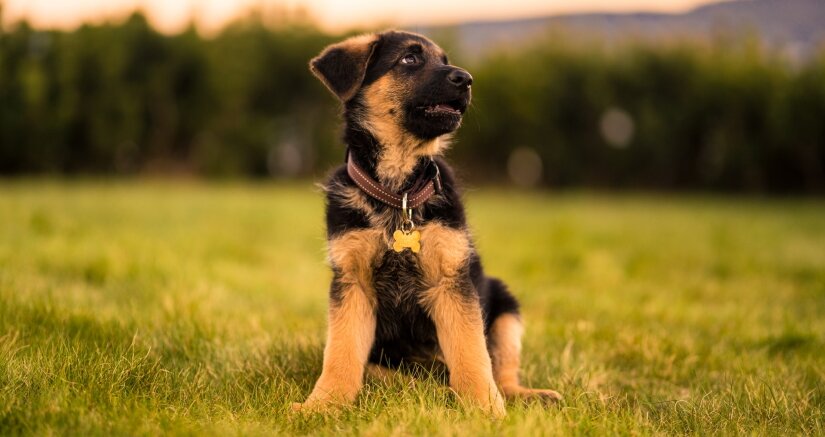 The biggest mistake you can make is to leave your dog’s food out all day. If there isn’t a specific time when his bowl should be taken away he’s going to think that eating is a privilege and that he has to guard his food as it might be taken away at any point.

So instead of leaving his food out all day wait for about 15 minutes after he starts eating, if he walks away by then, he has had enough and you can take the bowl away.

This consistent routine will make your German Shepherd understand that that is his eating time and that he doesn’t have to worry about it because you will give him more when he needs it.

On the same chain of thought never remove food from a growling dog. If he’s trying to protect it and you take it away; then he will think he must protect it even more.

Teach your children that a dog should be left alone when eating. After all, your kids don’t like it when you come and take their food away, so why should the dog be okay with it.

Food guarding is a common occurrence because people unconsciously reinforce this behavior. Yet it takes only a little common sense to imagine what you would do if someone would take your fridge away.