If you ask a dog owner and a cat owner about how comfortable they are in communicating with their pet, one of them is highly like to exclaim:

And one of them would say:

I can barely communicate.

We bet you can guess who claims what. Dogs are highly expressive with their emotions, while cats tend to be a mystery.

A dog could be wagging its tail vigorously, and you’d know it’s super excited to share something with you. Be it happiness or a sudden change.

If a cat does the same, it could take you 5-10 business days to simply decode the fact your cat was only bored.

Strange, yes! Cats are pretty strange beings with confusing means of communication. However, we wouldn’t say our feline friends are impossible to understand.

With the right knowledge, you could easily understand your cat’s say in one go. So, here in this article, we will be exploring and studying how cats communicate with us through their body language. Along with that, we shall learn about your cat’s vocalization. Let’s get to it!

Cats Rarely Communicate Themselves – A Myth

Cats are quiet and confusing. That’s absolutely true. But is it the same as being mute? Is it true that cats refuse to communicate their reactions to internal and external environments?

In actuality, cats can be very expressive of what they feel and perceive. Wondering how?

Well, they do so with their body language and different kinds of meowing! Yes, we understand that’s not the most direct means of communication. But it is what it is! The American College of Veterinary behaviorists even conducted thorough research on the matter and published Decoding Your Cat to help cat owners understand cat language better.

Also, most people often confuse the independent nature of cats with detachments and inexpressiveness. It is true that, unlike dogs, cats are not very needy when it comes to attention.

However, domesticated cats develop deep bonds with their owners’ overtime. They do exhibit signs of distress and anxiety when separated from their owners. Hence, we can say, cats may not be intensely and passionately expressive at all times. But when the time calls for it, they do not hesitate.

Note that although all cats are expressive, some cat breeds are naturally much less vocal. Examples of these breeds include:

Other breeds may not be as quiet and patient as those mentioned above.

How Do They Vocalize Themselves?

When we say vocalization, we basically refer to the meowing of your cat. It’s usually a means of communication between cats and kittens, so when your cat meows at you, it’s more often than not, viewing you as a kitten.

Also, note that when your cat meows, it’s usually vocalizing something important or a message that you failed to read in its body language. Here’s a detailed insight on why do they meow, how, and when.

Why Do Cats Meow?

The above are some everyday reasons why you may hear your cat meowing now and then. However, at times, there may be more sinister and complex underlying reasons such as Alzheimer’s.

Yup, you read that right. Elderly cats may develop cognitive dysfunction with time, which eventually takes the form of a cat’s version of Alzheimer’s disease. So, if none of the above seems to be the case for your cat, rush your furry pal to the vet!

Now, here are some common modes of meowing to help you identify what your cat is trying to say:

With that said, how do you tell if your cat is meowing way more than it should?

Well, it’s plain simple. You’d know it simply by the amount of annoying it is!

Note that cats like to draw attention in case a need arises, but they would quit meowing once you cater to their need. If you notice constant meowing, i.e., even after you’ve got them what they need, then it’s an indicator of greater underlying trouble.

As mentioned earlier, cats say a lot about their physical selves. At times, their movements may be too prominent, but most times, they will only convey their say with slight movements and gestures.

Ears are great indicators of your feline friend’s mood. The moment they feel something, you’ll notice a movement in their ears.

Generally, there are three common types of cat ear movements. These include:

When your cat’s ears are slightly forward, they are most likely in a playful mood. There’s something new to their environment, and they are curious to explore.

If you notice the ears are flat and more pinned towards the back of the head, then your cat is scared. At times, feelings of extreme anger can also cause the cats to pin back their ears.

As for the upright ears, usually, most cats have their ears upright because they are alert and observant. There’s probably something in their environment that’s caught their attention, and they are keenly following it.

Like ears, the change in eyes is automatic and involuntary. Some common cat eye indicators are:

Every body-posture and position of your cat has something to say to you.

If your cat is lying on its back with its belly exposed, they entrust you with their existence. Your cat’s relaxed and satisfied. You would very much want to give your furry pal a belly rub, but we shall warn you to be immensely careful! A belly rub could mean a serious scratch!

Similarly, if they seem relaxed but with an arched back, then they might want a nice rub from you or would like you to pet them. They might even be asking for their favorite toy or favorite cat treats. However, if you notice any signs of tension or anxiety, then your cat may be angry or scared.

If you witness your cat rubbing itself against hard surfaces, then it’s highly likely that your cat needs a good scratch. Give it one but also check your cat’s coat. The need for scratch usually arises if the cat has a lot of fleas. And if that’s the case, take your cat to the vet for consultation. If you notice only a few in its fur, then you can follow a regular shampooing routine with anti-flea shampoo.

Another alarming factor is the curled-up position of the body. Usually, cats sleep all curled up to preserve body heat. However, if you notice your cat sleeping too much in this position, then you might want to take it to the doctor as it indicates weakness.

Lastly, cats communicate a lot with their tails. A few common tail expressions are: 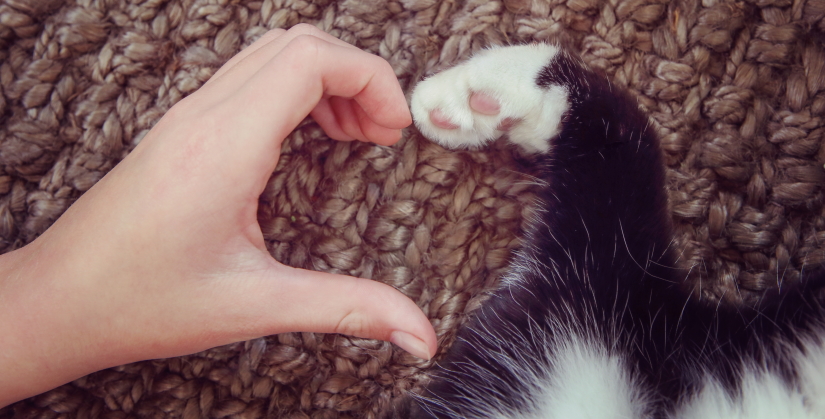 Q. What’s the significance of a cat rubbing its back against you?

If your cat’s running their back against you, you need not worry. Doctor Jill E Sackman clarified that kittens learn to rub their heads against their mother at a young age as an affectionate gesture.

So, later in life, this learned gesture sprouts up in different forms as the cat learns to rub its body against you and other surfaces/people. It comes off as a calm, relaxed, friendly, and satisfying gesture.

Note that by rubbing its head or body against you, the cat is marking you with its scent. It’s marking its connection with you and owning you.

Q. Is it normal for cats to lick?

Now that depends on what they are licking. If they are licking their selves, then it’s perfectly normal. Cats have healing powers within, and they know how to take good care of themselves.

However, if they are licking you, then it’s quite too rare of a thing! Cats rarely lick humans. But when they do, they aim to exhibit their extreme love and affection for you. They may lick your earlobes, skin, hair, and clothes. Cherish the moments when they’re so generous!

Q. Is kneading healthy for cats?

Yes, kneading is healthy for cats! Cats only knead the humans or cats they love. So, when they do, ensure you reciprocate their love and satisfaction.

Q. How to know if my cat is overstimulated?

If your cat has its tail wagging, its ears pinned back, retracted lips, and an arched back, it’s most likely overstimulated and ready to lash. Be very careful when moving around such a cat. It could give you some serious scratches. Other indicators of an overstimulated cat include hissing and growling. At times, the cats may even be fidgeting, walking to and fro, being restless, when it’s overstimulated.

Summing up, cats are more expressive than dogs, perhaps. If we were to talk of expressions in colors, dogs are capable of picking one color when expressing themselves. On the contrary, cats are capable of picking various and specific shades of expressing themselves. However, to notice the difference, we must have an eye keen enough to detect the difference between their shades.

Plus, we believe there’s an edge of elegance attached to a cat’s expression. Even in their fiercest, loudest of expressions, cats seem to be composed, contained, and somehow quiet.

For any cat owner, this elegance may not be a piece of good news. It may drive them crazy and nuts at times. But by sunset, when they curl up with you on your sofa, affirming that you’re the only human who gets them so well, it will all be worth it! Cheers to cat-keeping!